Satisfied after a good day’s vocational exploration, I head to the surfing beach as recommended. Busier than spots I’d previously sought, it is friendly and welcoming, and I find the Cairngormers and Gareth the nearly-Welshman in the hoody, both of whom were at ‘my’ beach a few days ago. Now Gareth is with another lovely guy, a gorgeous German called Sebastian who directs all his conversation at me, and we sip wine and chatter, joined by lovely Belgian Olivia and Yves and feisty French terrier Odette who demands love from Murphy every minute. I walk and weave and watch them surf. The sea gets big and looks terrifying. The Cairngorm girls bring me mackerel caught by their dad Mark, and I smoke it and it tastes delicious. Norman the Hattersley weaver visits the beach and we are surprised to see each other. ‘Is that yourself?’ he lilts, and gives me a kiss on the cheek. ‘And I thought I’d never see you again!’ It’s nice to know a few locals – anchor points, safe harbours. I stay for a few days, feeling cosy and enjoying our transient community.

I leave for a night and head to the northernmost point of Lewis, and Yves, Olivia and Odette appear there too. I walk both the dogs, spot fulmar chicks in the grassy cliffs, eat crab, go online, and watch the quiet harbour. 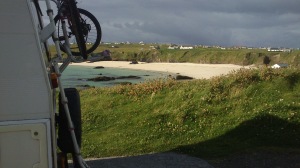 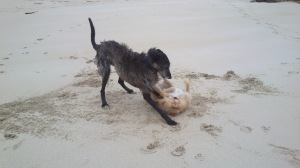 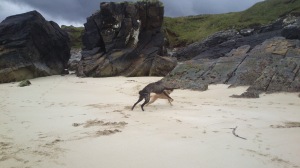 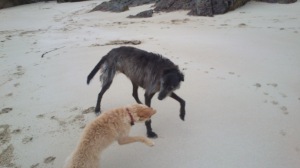 There is a fishing memorial, and the list of names and dates of stricken boats is moving. 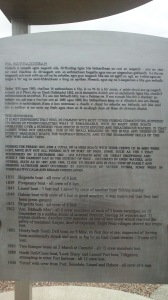 I meet a Mr. Tumnus type with a beard and piercing blue eyes. I flag him down because he is driving an old Merc the like of which I’ve never seen: a Mog, apparently, with a crane on the back. We talk about engines. He is alternative and evidence of a scene. It turns out that his partner is the talented designer whose rugged but highly tailored and lithely-lined work – kilts, aprons, cuffs, belts – I admired at the festival. This quiet little harbour sprawl has some life behind its grey concrete walls. 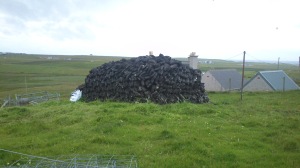 Thou must not covet thy neighbour’s peat stack

On my way back down the coast a brief signal spot delivers me several messages from the Stornoway police who have been advised to take my telephoned complaint about the shooting incident seriously, so they send a van out from town to meet me in a car park I’m passing. I give them a detailed account. They take random notes and are interrupted several times by something on their radio that sounds briefly as if it is more exciting, but then disappoints them. We conclude that it was a more serious weapon than an air rifle given the distance it covered, but they think it was accidental. I think they are wrong and that they’re missing significant details in capturing my statement, but never mind. I guess they’ll listen better to the next person who reports it. I have a tummy ache for hours high up in my gut and I’m not sure whether it is the bleakness of inattentive policemen in a concrete car park, the crab, or the fermenting peas I ate earlier. (Must fix my fridge.)

I return to the surf beach and rejoin the comforting little community for another few happy days, sharing anecdotes, perspectives, languages, beer, potatoes, flapjack, chocolates and a Scotch single malt with an English name. I’m sad as one by one they all leave. I leave too, docking for a night in civilisation where I need hook-up to iron all the woves I’ve made, and then come back here, resting up before I muster the energy to hit Stornoway for a couple of marketing days online and a couple of musical evenings. After that I will start the next chapter: Harris.