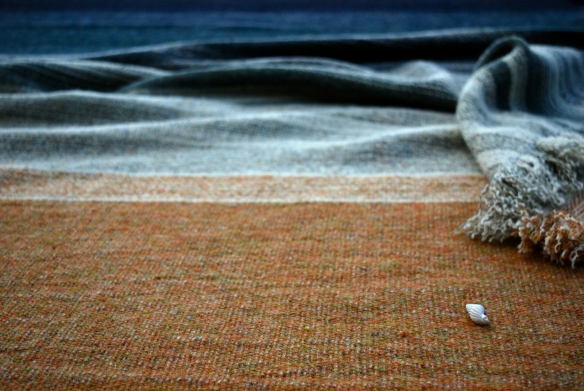 I decide to return to Devon for a pit-stop, and go via Dublin for a shorter ferry journey, a superhero gig, an invitation to the Etsy Ireland headquarters, and an evening with someone special. Though I give the van a good wash, I bail out of going to the Esty Ireland headquarters, as a few days in the city, a ferry journey and an evening with someone special feel like daunting enough challenges all at once, without also inviting a bunch of strangers into my tiny winter-worn workshop-home just now. I’ll have to come back soon for the honour of a work lunch and open studio.

I spend a night in a campsite on the outskirts that is next to an enormous park and which has rosemary hedges dividing some of the pitches. I’m nervous about parking in the city – all the car parks in the safer zones have prohibitive height restrictions – but public transport is the scarier option for this country girl, especially late at night, and difficult too with Hound. However, when I find a nice spot very near the centre the next day, just round the corner from the Palestinian embassy, I decide to overnight there. (Gotta be one of the weirdest.)

I pass a curious shop, the kind I might have expected to see in the Outer Isles, or in my childhood in the provinces: a narrow, high-ceilinged Georgian house has its ground floor hung unslickly with wovens and jumpers, and the lovely girl attending shows me the Swedish loom she is resuscitating in the basement. We make friends and I feel at home.

I visit some Viking textiles in the archeology museum, and wish I’d allowed more time for my visit, as Irish bogs have preserved a plethora of intriguing artefacts down the centuries.

Murphy finds some fans as ever, and I meet with said someone special on Stephen’s Green. A native Dub departed, he delights in showing me a corner or two, and we natter without pause, and though we are late for the gig, we have to stop so he can demonstrate somethingorother (Celtic? Viking? Identity? Equality?) properly with his hands. They’re beautiful hands, so I stop and watch. A swan makes her presence felt, and we exchange folk tales about swans, and then later Andy Irvine sings a beautiful version of the tale I have told, as if for us. Afterwards we head to O’Donohues, the pub he said that changed his life five decades ago, and the musicians are all still there, and we dig it.

I sleep well enough in the street, and walk Murph along the canal in the sun and cherry blossom next morning. There is a poet’s statue, a discarded sleeping bag, and a homeless man’s tent. Dublin is my latest love, and somewhere I plan to return, even live, though god knows how.

The next day the sky is blue, the sea calm, and our journey smooth. The only traffic jam occurs by a beach in North Wales, so Murph and I have a walk and it clears. Late at night we get to Gloucester Services and there the next day meet for lunch with the old schoolfriend who bartered me the big accordion there when we were on our way out to Ireland six months ago.

Devon feels busier than Dublin felt on St. Paddy’s bank holiday weekend with a rugby match (Ireland beat England, yey)! But it’s warm, and it keeps being warm for weeks on end, and so I keep on staying.

We spend a couple of nights camping with friends near Land’s End, in Cornwall, as a gig at the outdoor amphitheatre carved into the cliff coincides with my needing a crystal blue sea to photograph my latest weavings, and the last day of sunshine. The climb down to the first beach is steep, the afternoon late, the tide just turning, and my camera batteries failing. But fortune brings it all together in a narrow window and, after several years’ gestating these weavings and several months’ gestating the photography, here are the first of them: 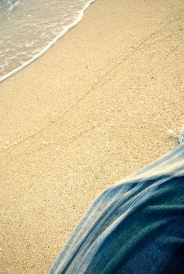 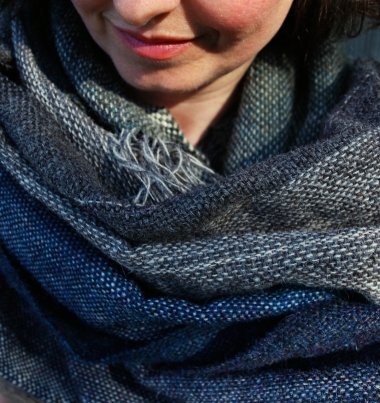 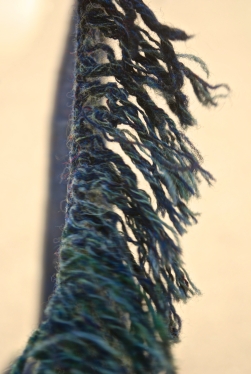 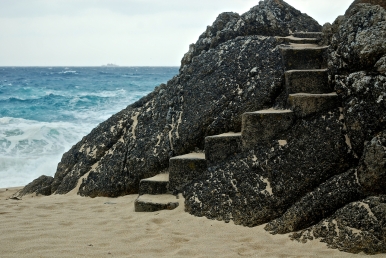 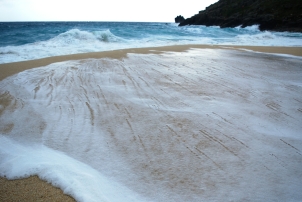 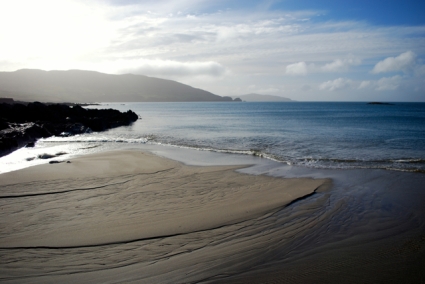 I planned to return to Ireland, but it’s not quite right just now. Week by week I hit on other exciting ideas, research them, make initial enquiries, resolve to realise them, then replace them with another: ruin renovation in Ireland’s West? Canal boat on England’s waterways? Agro-forestry in Wales? Weaving shed in Devon? Permaculture in Cornwall? Crofting in the Scottish Isles? Urban life in Glasgow? Cottage in Brittany? Finca in the mediterranean? Something in Scandinavia?

Britain’s general election will be a watershed and I may decide according to what this country looks like on June 9th. After an anxious drive to Make a Plan, I accept the uncertainty and concede that this lush Devon valley will do fine for a time. It serves a quiet working routine very well, and I meet up with old friends, unearth some great gigs, and plug back into political networks. A canvassing experience in a nearby marginal constituency has me enjoying knocking on doors though I thought I wouldn’t:

We’re voting Labour [all thumbs up and the warmth of conspiracy] I don’t know what I’m voting but not Tory [Then Labour is the only probable alternative, pleeeease!] We’re voting Lib Dem, even if they’re statistically unlikely here [Good for you for your conviction] I’m not voting for that Corbyn plonker [Well, he’s the very reason I’m here, but I respect you] And I respect you too [respectful smiles all round] You won’t get anything out of me [What, not even a vote?] You can’t speak for this city, you woman, you won’t seduce me with your party mantra [nastily, before I’ve even opened my mouth] Maybe… I’m going through a bereavement… Yep, Labour… Election?

No progressive alliance deal is made locally and so the left-of-centre parties are still pitted against each other. Even though this is supposedly an ultra-safe Tory seat, I make a quick straw poll to gauge the local mood for tactical voting and share it on social media, and the response is encouraging. What the metropolitans often don’t know about the blue and purple South West is that this is the cradle of Britain’s green movement; that, briefly a UKIP stronghold, nonetheless we were part of Devon’s only Remain area; that the NHS was conceived in talks here at Dartington College of the Arts; that radical and creative things can happen here first.

With our artistic and social innovations let us use our Pen against fascism and likewise redirect the Marche of greedy neoliberalism and its false freedoms.